Get the Best Ameren Electricity Rates

As a resident of Illinois and an Ameren customer, you have the ability to shop and switch to a lower electricity supply rate than what Ameren offers.

Below you will find Ameren’s “Price to Compare” as well as competing rates available in your area. Switching is 100% free and can be done in just minutes. For more available rates in your area, enter your zip code with our free Rate Comparison Tool at the top of the page.

Though not quite as old as its largest competitor, ComEd, Ameren combined several of the Midwest’s elder utility companies to become one of the biggest investor-owned utilities in the country. While ComEd, servicing Illinois’ largest city of Chicago, covers a greater population, a far larger portion of the state receives its bills from Ameren.

Ameren itself is a relatively young company, first incorporated in Missouri 1995 and becoming a major player in 1997 when the Union Electric Company in Missouri and the Central Illinois Public Service Company, which would become Illinois Rate Zone I, joined forces. The company then acquired the Central Illinois Light Company – Rate Zone II – in 2003 and Illinois Power Company – Rate Zone III – in 2004. Ameren operated in Illinois as three separate utilities before combining into one company with three rate zones in 2010. Both Union Electric and CIPS date back as far as 1902, though the other utilities were younger. 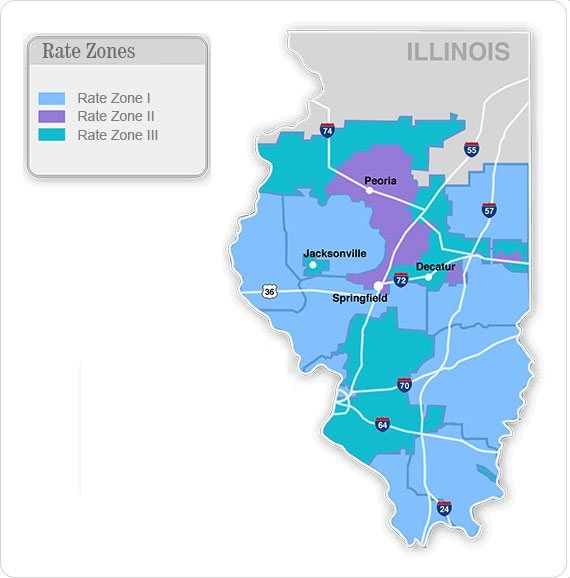 To compare and switch Ameren electricity rates, we have created a free Rate Comparison Tool. Simply enter your zip code and you will be able to compare electricity providers in your area such as Constellation and Direct Energy.

Compare electricity rates in under a minute.

Please note that when you complete your switch to a new provider, Ameren will still be providing you with your delivery cost. The provider you choose will contact Ameren directly and you should start seeing your new electric supply rate on your Ameren bill in 1-2 billing cycles.

For more information, visit our guide to Illinois Electricity Rates.