Founded in 2015, Octopus Energy is a UK-based electricity provider looking to shake things up in the Texas energy market. That’s because this renewable energy provider is really a tech company, allowing it to eliminate costly inefficiencies and pass the savings onto the consumer.

This focus on technology is why Octopus Energy has grown to serve over 2 million households in the UK. And while Octopus Energy’s technologies are not fully implemented in Texas yet, its selection of fixed-rate plans with no cancellation fees makes it a valid option for many.

Octopus Energy is an electricity provider that exclusively offers renewable energy plans. Its fixed-rate plans allow you to lock in your electricity supply rate for up to 12 months, and some plans include a subscription to Amazon Prime.

Other Octopus plans include a time-of-use plan for electric vehicles—offering lower rates at night to charge your car—and a custom rate plan based off your past usage.

All of Octopus Energy’s plans have a fixed base charge of $10 a month, but are otherwise straightforward, with no usage credits or minimum usage fees. Lastly, none of these plans have any early termination fees, a unique incentive for fixed-rate plans in Texas. 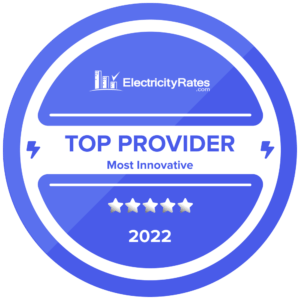 Octopus Energy earned a Provider Score rating of 3.81 out of 5, thanks to its plan selection and customer reviews. It was also considered the Most Innovative Provider on ElectricityRates.com’s list of the Best Electricity Providers in the US.

100% Renewable Plans With No ETFs

All of Octopus’s electricity plans are sourced from 100% renewable energy and have no early termination fees. The latter is particularly notable, considering many electricity providers have ETFs of $150 or more for their fixed-rate electricity plans.

While Octopus Energy is still gathering reviews in Texas, it already has thousands of glowing reviews from customers in the UK. Many of these customers note the organization’s spectacular customer service.

Octopus Energy earned its spot as the Most Innovative Electricity Provider thanks to the array of technological advancements it’s bringing to the industry. Of particular note is Kraken, its resource management system that efficiently routes renewable energy to 17 million customers in 12 countries.

However, Kraken isn’t the only new technology that Octopus has brought to market:

While most of these technologies are based in the UK, Octopus plans on bringing some of them (and their cost savings) to the US market over the next few years.

If you’re comparing electricity rates in Texas, it’s important to go over the steps that all Texans should take prior to enrolling: