Americans Consume a Lot Things During the Super Bowl, But Not Electricity

Home / How To Compare / Energy Choice Blog / Americans Consume a Lot Things During the Super Bowl, But Not Electricity 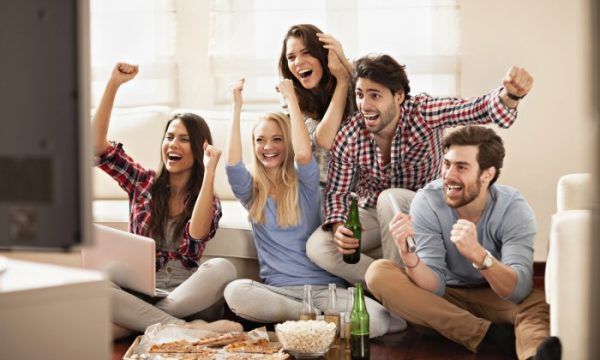 If you woke up this morning with a little bit of indigestion and a slight headache, you are not alone.

The Super Bowl is literally "super" in just about every way. Before, during, and after the game, we excessivelyconsume food and drinks. An estimated 1.2 billion chicken wings are eaten, 120 pounds of avocados are used for guacamole, and325 million gallons of beer is chugged on Super Bowl Sunday alone.

You might reasonably assume that Americans use an excessive amount of electricity during the Super Bowl as well. With all the big screen TVs turned on for hours and crockpots, ovens and microwaves making food for parties. It certainly seems like there is a lot of energy being used the entire day.

But, you'd be wrong.

Opower,acompany that was purchased by Oracle in 2016 and works withutilities to help them better connect with their customers, did a study to find out the impact of the Super Bowl on residential energy usage. After surveying nearly 100,000 homes they found that once the game turns on, energy usage plummets.

Versus a typical Sunday afternoon/evening in February, residential electricity usage was 5% lower during the Super Bowl and 3.7% lower the rest of the night after the Super Bowl aired. 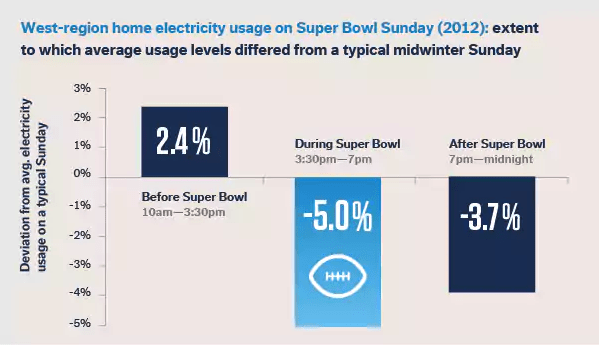 So, why does this happen? There are two main hypotheses for the reduced energy consumption during the Super Bowl. 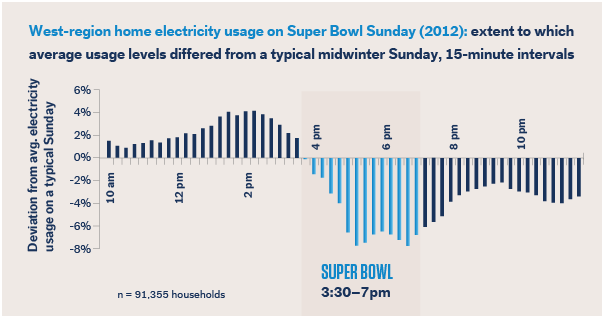 Second, people are typically either throwing a party or going to one to watch the game together. It is like carpooling for sports, the more people that watch the game together, the less energy is being used. However, the person that is actually throwing the party might not be so lucky when they get their energy bill for the month. Many will go to a local bar or restaurant with more TVs to watch and be around other fans.

As for at the stadium itself, well, that is a different story.

US Bank Stadium in Minneapolis, where the Super Bowl was played, is estimated to have consumed over 43,000,000 kilowatt-hours in the roughly 5 hours the stadium was filled with people. That amount of electricity could power over 4,000 homes for over a year.

That doesn't even factor in all the events and shows that were going on in downtown Minneapolis/St. Paul for the entire week of the Super Bowl.

So, while the event itself uses an insane amount of energy, Americans are typically very energy-efficient during the Super Bowl. If you were lucky enough to attend a party instead of hosting one, you will most likely see the benefits on your electricity bill this month.