Here are the current New Hampshire electricity rates for each utility along with the retail energy provider rates NH residents can switch to. Start by locating your utility below and selecting the rate you would like to switch to.

Like other New England states, New Hampshire residents are strapped with some of the highest electricity rates in the country. At 19.04¢ per kWh they have the 8th highest average rate in the US. However, because NH residents use less electricity, their average electric bill is only slightly higher than the national average at $120.01. 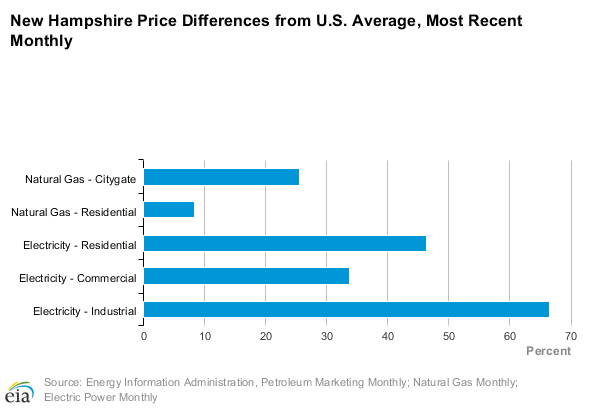 New Hampshire started the process of deregulating its energy market in 1996 with a bill that was proposed to the New Hampshire Public Utilities Commission. The proposed bill required the Public Utilities Commission to develop a plan for a competitive energy market and restructure the current utilities by 1998. The plan was finished by 1997 and laid the groundwork for independent retail electricity providers to start offering their services to NH residents.

Granite State Electric Company was the first utility to begin the restructuring in 1998. By December 2002, all of the New Hampshire utilities had restructured. In May of 2003, retail energy providers could begin offering their services to NH residents and businesses.

Although the state has been deregulated for over a decade, many New Hampshire residents and businesses still have not switched to an independent retail provider. This is mostly due to the large independent energy providers already marketing mainly to large businesses and corporations. Also, electricity price competition in New Hampshire hasn't developed as much as the state’s residents had hoped. However, this trend is starting to change in New Hampshire as more and more competitive rates are being offered and marketed to residential consumers.

For many people, the most important thing to compare when shopping for electricity is the cents/kWh rate. If this is the case, you'll want to find a retail electricity provider that offers a lower rate than what you are currently paying, which is referred to as the "Price-to-Compare" and can be found on your current utility bill. Keep in mind, even a slight difference can result in large cost savings. However, some might be looking for a more environmentally friendly renewable energy plan. At ElectricityRates.com, we do our best to find the best rates and best green energy plan for you and put them at the top of the results page. There are other factors that should be considered when shopping electricity rates:

Variable pricing can vary by day or month, is based on the market price for the retail electricity provider, and can be very unpredictable. However, often time providers won't charge an enrollment fee or early termination fee with these plans. With fixed pricing, customers can pay one low rate that will never change until the contract expires.

LENGTH OF THE CONTRACT

Contract terms can last for as little as one month or as long as 36 months. Shorter contracts may offer lower rates, but longer contracts lock in low rates for long periods and reduce the risk of high rates when the contract expires. The ICC recommends choosing a 12- or 24-month contract to avoid risk.

How do you find the best electricity rates in New Hampshire?

At Electricityrates.com, we make it fast, simple and easy to shop and compare electricity rates in your area. All you have to do is type in your ZIP Code atthe top of this page and we bring you all of the best rates.

We even have our energy industry experts select the top plans no matter what is most important to you and put them on the top of the results page. It's 100% free to compare rates and switch electricity providers so what are you waiting for?