In this post, we are going to take you through the main aspects of Pennsylvania's energy consumption. Most of the data was gathered from the U.S. Energy Information Administration. But since that can be some hard data to go through, we are presenting it in this easy to read format. Enjoy!

The total energy consumption for Pennsylvania in 2017 is estimated to be 3,807.7 trillion BTUs. This makes Pennsylvania the 6th highest consumer of energy in the nation. However, when population is taken into account, they drop down to 26th at 298 million BTUs of total energy usage per capita.

The EIA splits up total energy consumption into four sectors: 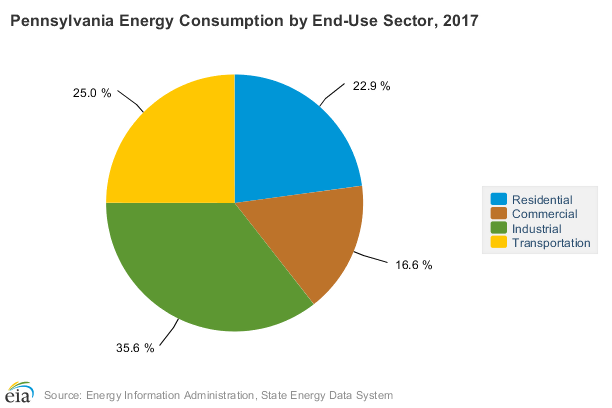 As you can see from the graph, the industrial sector consumes the largest portion at 35.6%. Pennsylvania is rich with resources like natural gas and coal. The cultivation of these resources is likely why Pennsylvania consumes so much energy on the whole compared to states who have limited natural resources and a smaller industrial sector like the state of Connecticut. [insert hyperlink to Connecticut power usage article]

What Are Pennsylvania's Energy Sources 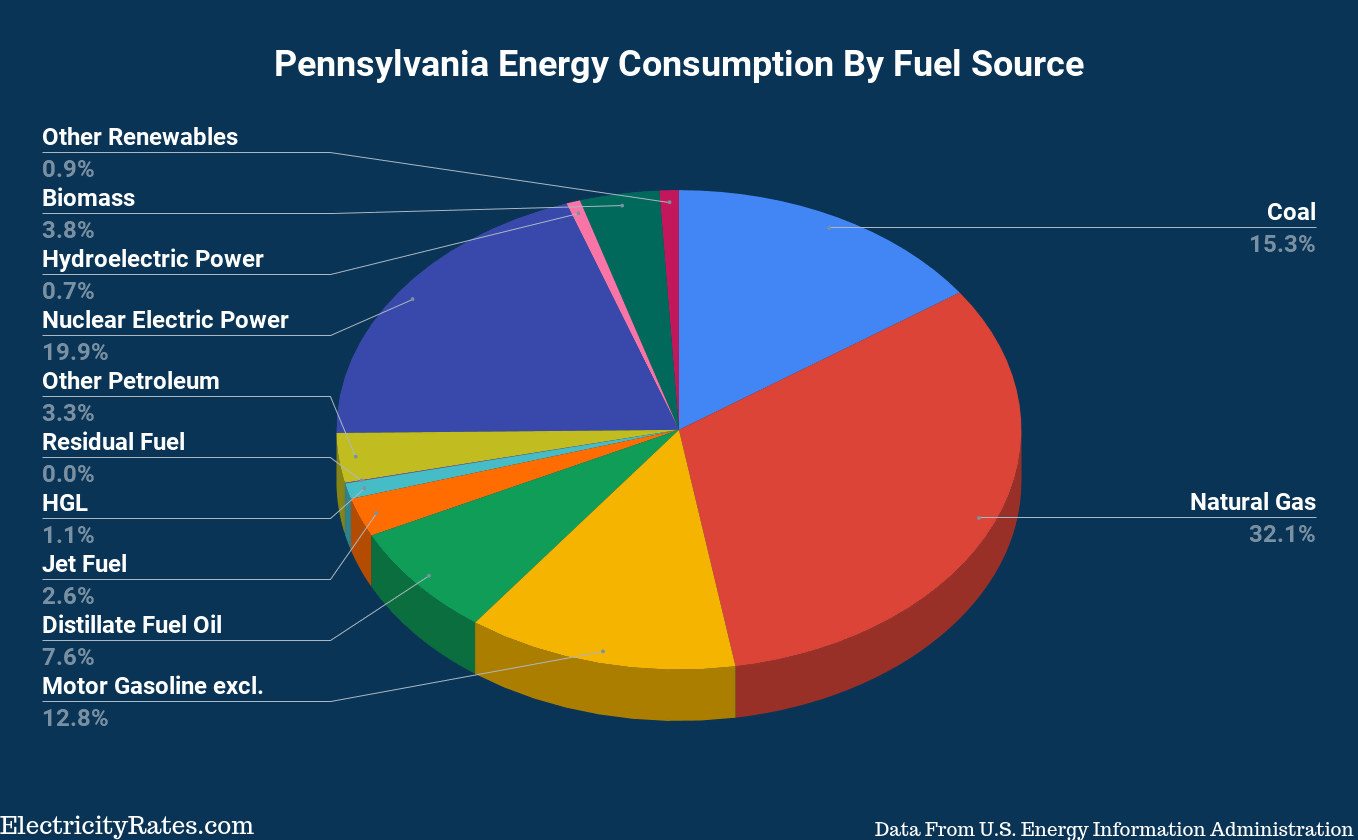 It is important to note that 570 trillion BTUs traveled outside of state lines. The total BTUs used by Pennsylvania cited above (3807.7 trillion BTUs) does not include this energy. The above percentages are based on the total 4377.7 trillion BTUs. (2017)

1,403.7 trillion BTUs of natural gas were consumed in 2017. It is used for both electricity production and is the primary way that Pennsylvania households heat their homes.

Second, there is nuclear energy, which comprises a large amount of the state's total energy consumption and is actually #2 in the entire nation. According to the Nuclear Energy Institute, there are nine nuclear power reactors in Pennsylvania that are producing 92% of the state's carbon-free energy. Although nuclear is carbon-free energy, it is not considered a renewable resource.

In third place, we have coal, of which 669.5 trillion BTUs were consumed. Coal has been declining in usage throughout the United States and Pennsylvania is no exception. Coal has been on a steady decline in Pennsylvania since it peaked in the year 2000. 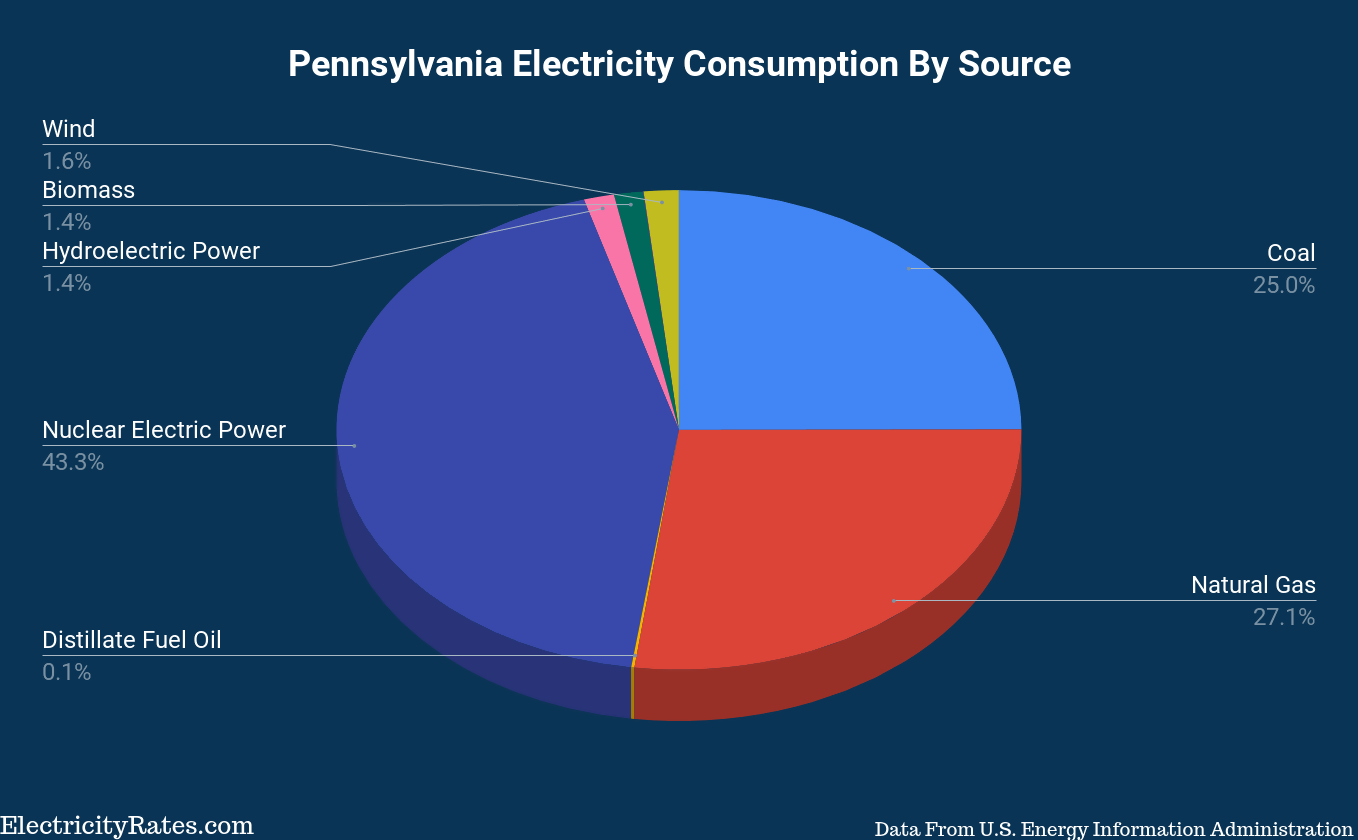 Out of the total energy consumed in Pennsylvania, an estimated 2,009.8 trillion BTUs were consumed through electricity in 2017.

Notably, nuclear comes out ahead here, with all 870.2 trillion BTUs consumed through the electric power sector.

Natural gas comes in behind with 544.9 trillion BTUs consumed through the electric power sector. When you combine this with electricity from nuclear, over 70% of the electricity in Pennsylvania comes from these two sources.

Coal comes in third at 501.8 trillion BTUs. Again, this is declining rapidly and is likely substantially less today if it follows the current trend.

Renewables are in last place, with wind slightly beating out hydroelectric to be the primary source of renewable energy, followed by biomass. All together they make up just over 4% of the electricity production.

Learn more about energy options in Pennsylvania by visiting our comprehensive guide to Pennsylvania electricity rates.