The Light Bulb That May Never Go Out

About an hour east of Oakland sits the small town of Livermore, CA. There, hanging in the garage of Firehouse #6, is a light bulb. It's on, right now, illuminating the fire station garage just like any normal light bulb would. However, unlike any other light bulb in the world, this bulb has been on for 116 years.

This bulb was made in the early years of electrical lighting in the world. Many think of Thomas Edison when they are asked about the very first light bulb. However, there were many others that challenged the design and longevity of the first light bulb to make them last longer and cost less. One of those men was Adolphe Chaillet, who was an inventor and electrical engineer. Chaillet's created a light bulb that would consistently burn brighter and last longer than any other light bulb invented. One of his light bulbs made it all the way from Paris to Livermore, CA and is still burning bright today.

At first, the bulb served a very important purpose. It provided the light that would allow firefighters to find their gear in the darkness of night. As the years past, the bulb was less and less important as more bulbs were installed in the fire station. Many firefighters had no idea how old it was or the significance of it. In fact, some of the bored firefighters admitted to throwing nerf balls at it from time to time.

It wasn't until 1971 that the fire chief at that time, Jack Baird, asked a local newspaper to look into the bulb’s history. He could see that the bulb was clearly much older than any other in the building but had no idea how old it actually was. The resulting story got the town talking about the bulb and it has been a source of pride for the locals ever since. 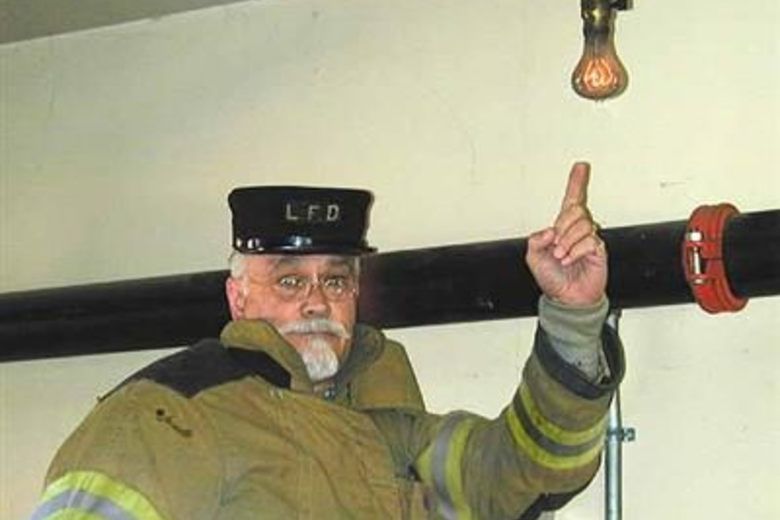 In 2001, a group of locals formed a "Centennial Bulb Committee" to throw a 100-year birthday party for the bulb. They expected just a few of the locals and firefighters to show up for the party. To their surprise, 600 people showed up to honor the light bulb. President George W. Bush called the light bulb "an enduring symbol of the American spirit of invention."

What the bulb is made of and how it has stayed on for 116 years is still a mystery. The only way to find out is to open the bulb up but no one wants to take the chance of breaking the light that has burned for more than a century. Many of the firefighters in Livermore see the bulb as a source of inspiration because it's dependability and the fact that it has been "doing its job" for over 100 years.

You can see the bulb burning brightly in real time by visiting the Centennial Bulb Cam.