Between February 13th and February 17th, a winter storm unofficially called Winter Storm Uri pounded the majority of the US. Texas, usually known for its mild winters, experienced a week of snow, ice and below-freezing temperatures that caused power outages for millions of Texans.

Water pipes burst and caused water shortages. As wholesale electricity prices skyrocketed, some customers were hit with bills in the thousands. In total, the damages are estimated to be over $200 billion.

In this post, we are going to look at the many factors that caused this and also discuss what needs to be done to prevent something like this from happening again.

A Quick Overview Of The Texas Electrical Grid

Texas is unique in that it operates its own electrical grid. The other 47 states in the continental US are split between the Eastern and Western Interconnection. 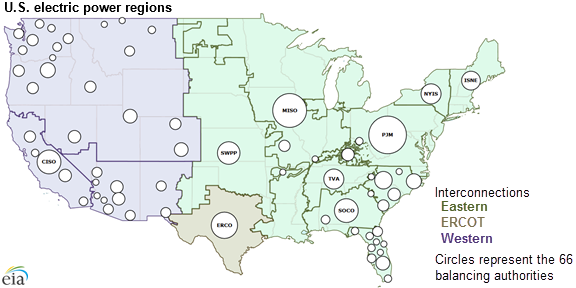 The Electric Reliability Council of Texas (ERCOT) manages the electric grid to try and keep the grid running reliably. It is overseen by the Public Utility Commission of Texas (PUCT), which is in charge of regulating utilities in the state.

ERCOT knew that Texas was going to experience a winter storm, and had prepared to handle it. However, ERCOT underestimated the severity and duration of the storm, which kept temperatures below freezing for days.

When temperatures started dropping, Texans immediately went to their thermostats to turn up the heat and increased the overall load on the power grid.

While this was happening, the storm brought ice. Electricity generators' equipment wasn't designed for severe winter weather and started to fail. There was not enough electricity to keep up with the demand.

For any electric grid, this is very bad. A stable grid requires a balance of supply and demand to function properly. If demand overloads the electric grid, the entire grid can fail and it can take weeks to repair.

On the morning of February 15th, ERCOT was reportedly 4 minutes and 37 seconds away from this happening. To avoid this, ERCOT started rolling blackouts, purposefully shutting off power to certain sectors to stop the grid from overloading.

Still, the cold weather caused a significant percentage of Texas's electricity generation to remain offline. This caused 4.3 million Texans to go without power. For some, it would be days before the lights flickered back on.

What Caused The Blackouts In Texas?

There were two primary causes of the February 2021 Texas power outages:

On February 25th, Texas retail generators, ERCOT and the PUCT testified at legislative hearings to figure out what went wrong. These entities confirmed that it was mainly the failure of natural gas facilities that led to the power outages.

Natural gas generates more than half of the electricity in Texas. On top of this, many of the peaker plants that are meant to come on when electricity consumption increases are natural gas.

When the ice storm hit, wellheads and pipelines froze, stopping the supply of natural gas to generating facilities. This lead to a 25,000 MW drop in natural gas capacity. This is just under a quarter of the total generating capacity in the state.

An Overall Lack Of Winterization For Power Generators

However, all the blame can't go on natural gas. While it did make up almost half of the 52,277 MW of generating capacity that went offline, both wind and coal underperformed as well.

Wind lost 18,000 MW of generating capacity as wind turbines froze from all the ice. Coal dropped about 5,000 MW in capacity.

It's important to note that all these fuel sources can perform in more extreme environments than what Texas saw in February. The difference is that Texas electricity generators didn't winterize the equipment because the state rarely sees these temperatures.

Why Did Some Texans See Astronomical Electricity Bills?

One of the major headlines in the aftermath of the Texas outages was the crazy high electricity bills. Some residential electricity customers received bills in the thousands, including one man who got a $16,000 charge for his consumption.

Recently, Texas placed a moratorium on shut-offs for unpaid electricity bills as state reps try to find ways to ease the burden on Texans. However, many are still wondering how this happened in the first place.

Well, in Texas, residents choose their own electricity provider and plan. There are many types of plans out there, but two broad categories are fixed-rate plans and variable-rate plans.

These wholesale plans can save you a good amount of money, but in periods of high electricity demand, the wholesale price for electricity can go to $9 per kWh (the average cost of residential electricity in Texas is $0.1176 per kWh).

How To Avoid This

How To Stop This From Happening Again

There has been a wide array of suggestions on how to avoid this type of situation from happening in Texas again. Here are some of them:

While it may be rare for Texas to see the weather it did, electricity generators need to be ready for when it does.

After a winter storm in 2011, Texas experienced power outages as well, albeit less severe ones. The PUCT then assessed what was necessary to improve grid reliability. Winter weatherization of equipment was a top priority.

Unfortunately, this eventually became just a recommendation. And since weatherization is more expensive, it didn't make sense for electricity generators to spend the extra money for weather that might happen once every 10 years or less.

Mandating these improvements would help improve the reliability of power generators during extreme weather events.

Update: On June 9th, 2021, Gov. Greg Abbott signed Senate Bill 3 into law, which requires the weatherization of Texas's energy infrastructure for the possibility of extreme weather events. However, this bill does not provide any state funding for weatherization, which leaves a few energy experts predicting that energy costs will increase.

Right now, Texas does not mandate a reserve marginthe amount of extra electric capacity over expected electric demandbut instead incentivizes companies to be ready to operate through scarcity pricing.

The problem is that this model can only incentivize so much reserve margin. It is also why many variable-rate customers saw massive electricity bills. More than that, some like Curtis Morgan, the CEO of Vistra Energy, feel that the volatility of this market structure scares off investment in the Texas power market.

That's why some people are suggesting changing the model to mandate a higher capacity. This would allow for a greater margin of error when demand increases, helping prevent power outages like the one Texas experienced. Perhaps more importantly, it could stabilize prices for Texas electricity providers, and therefore, electricity consumers.